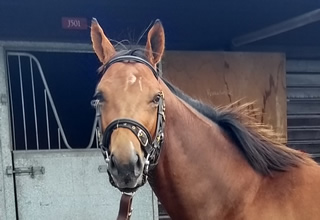 Gender: Gelding
Birth Year: 2017
Colour/Markings: This gelding is dark bay in colour. He has one white sock, on his back left leg. He also has two white marks on his forehead and a white smudge on his nose.
Racing Post Form: View Race History
Racing Code: Flat
Expected to race in: South and Midlands

This youngster is by a sire we have already tasted success with (Smashing Lass) and was the pick of the colts we were after at the sales. His mother, Dutch Lady, was a winner at Thirsk and placed a number of times before winning a further three times abroad. She is from the family of the top class Wi Dud and Tariq. She comes from a line of horses who tend to get sprint distances as youngsters, but can mature into milers.

Sir Prancealot was top class sprinter, winning in Group 2 company. He is already had group level success with many of his offspring, including Sir Dancealot and Ginger Nut.

If you are looking for a deeper involvement with Sir Ten T 2020, check out our list of Private Service shares. We may have leases or outright shares available in this racehorse from 4% and above.

Sir Ten T stood out at the sales, as Adam West already had prior knowledge of him before attending the Doncaster Silver Sale. The colt was among a group he saw as foals at Mickley Stud and had followed this youngster's progress from an early age.

This youngster is a proper character. He is a feisty, busy gelding with a good attitude and is very forward in terms of maturity. At the sales he was pulling his lead up man around the ring, keen to get on with things. His temperament is good though, he will be the first to have his head over the stable door in the morning asking to be fed, and is able to relax well when he gets some attention.

This colt wasn't the biggest when he first arrived in the yard, however he is bred to be a sprinter and is nicely compact - which should ensure he can get to the track earlier rather than later. He will also grow significantly during the 2019 winter, however, we're not too worried about his size, as the family he comes from (including Wi Dud) were not huge horses - however they had plenty of ability.

Sir Ten T is trained in Surrey by Adam West, who was delighted when we confirmed we would be sending him to his yard in Epsom. He told us "This lad has plenty of character about him and I'm really pleased we've got him. I've been monitoring this horse for the last few months, as I regularly head to the Mickley Stud to see what sort of horses they have coming through. For our sort of budget I think he's a great buy.'

"He is a foal I have been aware of for many months and was hoping to get to train him as he's got the look of a very early type and he has a decent pedigree, coming from a winning mother."

Sir Ten T is trained in Epsom. He received his racing name because of his temperament and his stable name (Tommy). Originally he was to be called Triple T, which stood for Tiny Tommy the Tearaway! However, the BHA naming committee objected to this name, even though it was available. Instead we managed to get Sir Ten T passed then - 'Certainty!' He will be available to view at our Spring yard visits by his shareholders, prior to going racing in 2020.

This youngster will probably start at the minimum distance of five furlongs and could be going up to seven by the end of his first year in training. He is bred to be a sprinter on his father's side, and despite his mother winning over a mile, her family is littered with speed. His breeder was certainly expecting him to be out racing in spring, as he commented 'This will be your first 2YO runner of 2020 for sure - he's as keen as mustard.'

"He is very likeable, has a good eye, is nice and compact and well balanced. On a day where the prices were reasonable we still had to go to seven thousand to get him - which is a testament to the fact that other people also thought he was the racy type likely to be out early." commented Adam.

We are really hoping this gelding will see a racetrack early in 2020. However, potential shareholders should be aware that you can never legislate for how a horse may grow, develop or indeed have setbacks. Adam tends to bring his 2YO's along in their own time, but isn't afraid of racing them against top-class animals. So shareholders are likely to see a couple of runs before the true potential of this youngster is realised.

We really liked this chap in the sales ring. He was full of life, and came across as a determined, feisty individual who was very forward going. He is an April foal, which should also mean that he will be ready to race earlier, rather than later. His family is full of black type and coming from a winning mother we believe he has every chance of being a winner himself.

Sir Ten T is a really interesting sort and could be anything. He will be broken and ridden away before Christmas and then brought on in the new year before heading to a racetrack in the south for the first time sometime from April to June. Your Racehorse Manager account will keep you up to date with any major milestones the youngster reaches and of course we will be reporting regularly from March onward, when we will get a feel for the type and quality of racehorse he is likely to become. We will be holding a spring yard visit as soon as the weather improves, and before he runs his first race.

UPDATE JULY 2020
This youngster made his racecourse debut in June and is expected to race again in July. He found some very firm ground difficult to cope with on debut and so may race on the artificial surface next time out. The pandemic has caused us to re-evaluate the season for our horses, and so we have added an extra TWO MONTHS to all share periods, meaning this horse may well run into November and December, depending on how the season develops.

The race plans for this colt will be determined by his level of ability shown at home and on the course in 2020.  On breeding he should start at five furlongs and then will perhaps get further as he develops physically and mentally during the year.

If he shows the need for longer distances at home, he may have to wait for the six or seven furlong races a little later in the season.  However, we will assess this colt's progress and if Adam believes he has the right level of ability he may get entries for some of the more prestigious races in the racing calendar.

We expect to get 2-5 runs and sometimes more from all our 2YO horses per share period/season, however, you should expect periods of no racing as a result of recuperation from injury or training setbacks. This share period starts proper at the start of the turf season on April 1st 2020 and runs through the turf season until November 1st 2020, however, we will be reporting on the horse before the share period starts (from January 2020) should we have anything of importance to share with shareholders.

As a shareholder youmust understand that we cannot guarantee your horses performance, a specific volume of runs (beyond our minimum guarantee) or that runs will be evenly spaced throughout the share period.  This is the chance you take when owning any racehorse and participating in this ownership experience.  If you will be disappointed with only 2-3 runs from your racehorse during the season, then please DO NOT PARTICIPATE IN THIS OR ANY OTHER RACEHORSE, as you could be disappointed.  We believe in being crystal clear with our shareholders - any participation in racehorse ownership is a risk, and we are unable to make any refunds because of share periods which finish early due to injury or retirement - as training, vets and livery fees for the horse still remain whether they are racing or not and part of your lease payment covers the five months of pre-season training.