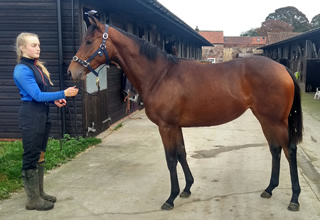 Only 2 share(s) equalling 0.4% is needed to qualify for prizemoney payments from Find a Penny 2020's racing season.

Gender: Filly
Birth Year: 2018
Colour/Markings: This filly is fairly dark bay colour, with no distinguishing markings at all. She is every-so slightly parrot-mouthed, but this will not affect her breathing or her ability to race.
Racing Post Form: View Race History
Racing Code: Flat
Expected to race in: North and Midlands

This filly has some impressive family members, being from the lines of Invincible Spirit and Acclamation. The filly's dam, Carnoustie, was a high-class performer on the grass over a mile, being placed six times in Listed company in France and earning almost £90k in her career. She ran at two and won over six furlongs.

Charm Spirit is a young sire, but has already tasted success with several of his offspring. He was a top-class seven furlong horse as a 2YO and was unbeaten in Group 1 races over a mile as a three-year-old. He stands for £17,500.

If you are looking for a deeper involvement with Find a Penny 2020, check out our list of Private Service shares. We may have leases or outright shares available in this racehorse from 4% and above.

This filly was bought at the Tattersalls October Yearlings sales, probably the most prestigious yearling sale in Europe. She is an extremely well bred individual, coming from the lines of Invincible Spirit (stands for £100k) and Acclamation (stands for £40k) and Charm Spirit, the filly's father stands for £17,500. We were shocked when we were able to afford to bring this youngster back home with us, as she is well conformed, walks nicely and is quite a strong individual.

Her mother, Carnoustie, has a wonderful profile. She was raced in France, but won as both a two-year-old and also at three. Incredibly, she was placed second or third in no less than six Listed races at between six furlongs and a mile. Given that Charm Spirit was a top-class seven furlong horse as a 2YO, we are expecting that this filly will be starting her career over six furlongs in 2020.

She is a shade over fourteen hands, which places her on the smaller side, but she is not tiny by any stretch of the imagination. She's a March filly, so having an extra month or two at the start of the season before the six furlong and seven furlong Maidens start will allow her that extra time to grow.

Ollie told us "I wasn't particularly looking to buy her, as I thought she would be well above our budget. I know the breeder well, and they were expecting her to make around twenty thousand. When the bidding stalled at less than a quarter of that, I pounced and couldn't quite believe I'd been able to win the bidding! She is a good shape, very correct, and was incredible value for money.

Ollie continued: "Her mother was almost Group class and her sire was the best miler of his generation. You really couldn't find another filly with that sort of page for that sort of value in the rest of the Book Three sale."

Shareholders need to be aware that everything points to this filly being a horse who will improve as she goes up in distance. She may not run over the minimum distance of five furlongs, which will mean that she will first see a racecourse in May or June, when the 6f and 7f races start to become more numerous in the programme book.

The filly has already been given a stable name of 'Penny'.

She will grow over the winter and we are hoping she will develop into a really nice type, just like her mother. She already has a half-sister who has won twice in 7f Class 2 handicaps for Sir Michael Stoute this year.

"If this filly is only half as good as her half-sister, I'd be delighted. Neon Sea has won two big handicaps for Stoute this year as a three-year-old. I think she's got the profile and looks of a winner and if we're lucky she might be a bit above that level as well. The winter will be very interesting for her as I'm hoping she will grow and lengthen out." stated Ollie.

This Charm Spirit Filly is currently at Ollie Pears' yard in Malton and will be broken in November. She will get a rest through December and start building up with trotting and cantering from mid-January onwards. If everything goes to plan, we're expecting her to be ready to start racing in May or June, when her 6f and 7f races start.

We expect between 3 and 7 runs from this filly in the 2020 season, and she will most likely race around the Yorkshire, Lancashire and North Eastern and possibly Scottish racetracks.

UPDATE JULY 2020
Find A Penny has commenced her debut season and should run several times throughout the rest of the year. She followed up a promising start to almost get placed in a hot maiden at Thirsk at 150/1. She is expected to race again in July. The pandemic has caused us to re-evaluate the season for our horses, and so we have added an extra TWO MONTHS to all share periods, meaning this horse may well run into November and December, depending on how the season develops. Find A Penny has improved hugely for experience, finishing 3rd in a Maiden in July at 33/1 after running green on her first two starts. Now qualified for nurseries, she has a great mark of 61. Last few shares reduced by £10 to £79 from £89.

The race plans for this filly will be determined by her level of ability shown at home and on the course in 2020.  On breeding she should start at six furlongs and then will perhaps get further, most likely seven furlongs or a mile, as she develops physically and mentally during the year.

If, as we believe, she shows that she will need a minimum of six furlongs, then there are plenty of races available for her from late May onwards.  We will assess this filly's progress and if Ollie believes she has the right level of ability she may get entries for some of the more prestigious races in the racing calendar.

We expect to get 2-5 runs and sometimes more from all our 2YO horses per share period, however, you should expect periods of no racing as a result of recuperation from injury or training setbacks.  This share period starts proper at the start of the turf season on April 1st 2020 and runs through the turf season until November 1st 2020, however we will be reporting on the filly before the share period starts (from January 2020) should we have anything of importance to share with shareholders.

2YO's are the most risky of racehorses to own - and you should be aware that there is a chance that your 2YO may not race at all. Around 20% of 2YO's will not reach the racecourse during their 2YO season simply because they are not ready.

As a shareholder you must understand that we cannot guarantee your horse's performance, a specific volume of runs (beyond our minimum guarantee if injured) or that runs will be evenly spaced throughout the share period.  This is the chance you take when owning any racehorse and participating in this ownership experience.  If you will be disappointed with only 2-3 runs from your racehorse during the season, then please DO NOT PARTICIPATE IN THIS OR ANY OTHER RACEHORSE, as you could be disappointed.  We believe in being crystal clear with our shareholders - any participation in racehorse ownership is a risk, and we are unable to make any refunds because of share periods which finish early due to injury or retirement - as training and livery fees for the horse still remain whether they are racing or not and part of your lease payment covers their build-up to the season.