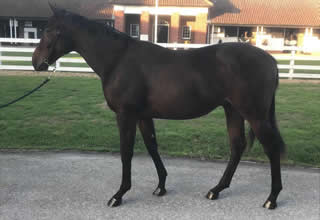 Only 1 share(s) equalling 0.3% is needed to qualify for prizemoney payments from Spacesuit 2020's racing season.

Casaca was a top class mare, winning Listed and Group Three races from a mile up to a mile and a half, being rated 106 by the time she was retired to stud. This colt is only her second offspring, the first has only raced once so far, in a 12k Maiden in France, finishing mid-division on heavy ground.

Sea The Moon is a young sire, his first crop racing in 2018 where he had a respectable one-third of his 2YO offspring win races, from six furlongs up to a mile. He was the German Derby winner and also raced as a 2YO, winning over a mile. He currently stands for 15,000 GBP. 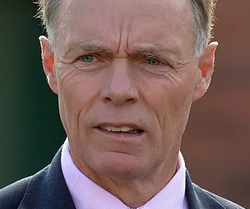 If you are looking for a deeper involvement with Spacesuit 2020, check out our list of Private Service shares. We may have leases or outright shares available in this racehorse from 4% and above.

Mike Murphy went over his budget in order to secure this son of Sea The Moon (top quality stallion by Sea The Stars) as a 2YO but we were quite happy he did when we saw the gelding up close. He has an outstanding European pedigree and is bred by a German Derby winner out of a French Group Three winner over the same distance!

This youngster's sire, Sea the Moon, has enjoyed a number of quite high profile runners in his first crop. It seems they all improve as the season develops and from twenty-five 2YO's to race, a third of them won races. His Mother was top class - winning a Group Three contest on soft ground easily as a three-year-old. He has been named 'Spacesuit' as his mother's name means 'Jacket' in Spanish.

Mike Murphy struggled to get this gelding to the racetrack in 2019 as he was backward and managed to get a string of minor setbacks from July onwards. In late December 2019 we decided to call it a day and give the gelding a full three months of rest in order to line him up for his 2020 season. We expect this chap to need at least seven furlongs and probably a mile as a starting distance. We bought this 3YO at the Tattersalls Sales for GBP 7,500 as a 2YO and he immediately went to Mike's training yard in Westoning and has been there ever since. We know that the gelding moves incredibly well, and we wouldn't have kept him into his 3YO year if we thought he wasn't worth the investment in time and money.

Mike said recently: "He's a nice sort, but we could never get a clear couple of months with him in order to really see what sort of engine he's got. He managed to pick up a virus early season, then was struck down with a runny nose for a month which pushed him back, and then the winter kicked in and he managed to bruise his foot. Hopefully these juvenile type of setbacks are behind us now and we can kick on with him through 2020."

The gelding has lengthened out nicely and is a good size and has scope - one of the other reasons we're happy to have a 2020 season with him. He was a late foal (early May) and we believe he was a really great buy because at the time, he was probably a little bit smaller than some of the other colts at the sales. However, he has grown over the last year and is a different horse now and will improve again by the time the 2020 flat season gets rolling.

Mike explained: "The constant setbacks can sometimes happen like this with 2YO's, but we like him and given what he's shown to date at home, and the quality of his breeding, he is certainly worth sticking with."

Mike told us "His pedigree screams 'miler', but I would expect he will start at around seven furlongs in May or June and go on from there. He really is bred to be a mile and a half horse and I expect he will undoubtedly train on as a three-year-old. Many of Sea The Moon's first crop have done better as they matured. I think Spacesuit may actually be better for having missed his first season. He's a more mature and substantial horse now than he's ever been.

"This gelding's mother was top class. She won in Group Three company and she's only had one foal before this one. This lad could be anything." stated Mike.

Potential shareholders in this gelding should consider that they are becoming involved in a racehorse who by breeding is going to need a trip, therefore please don't expect this youngster to race over short distances. Middle distance horses will not race as frequently as sprinters because they take more out of themselves with each run. Also, given the delays we've had with getting him to the track, there is also the chance the same could happen this season. However, Mike believes giving the gelding a good rest at the start of the year should set him on the right course. We always saw this lad as a two-year project and his 2020 season will hopefully see the hard work from Mike and his team in Westoning come to fruition.

We will be keeping his shareholders up to date with any major milestones he achieves before his flat season starts in April.

The race plans for this gelding will be determined by his level of ability shown at home and on the course in 2020.  On breeding he should start at seven furlongs or a mile and almost certainly get further as he develops physically and mentally during the year.

The standard route of a horse of this type will be to start in Maiden (races for horses who have yet to win a race) or  Novice/Auction or Selling/Claiming races (3YO only races where previous winners get extra weight) and his performance in these first three of four races will determine whether he goes into handicaps, or is good enough to tackle conditions races or even step into pattern races (high value, prestige races).

We will assess this gelding's progress and if Mike believes he has the right level of ability he may get entries for some of the more prestigious races in the racing calendar.

Your online Racehorse Manager will provide full details of all developments in terms of Spacesuit's progress and race planning as the season progresses.

We provide guarantees with all our racehorses. If this gelding has a season-ending injury and has not already raced twice during the share period, we will replace him with an alternative horse for the remainder of the season. Replacement horses may not be of the same quality, are provided with no further guarantees and no alternative choice can be provided. Prizemoney cannot be paid on any replacements, but all other benefits such as yard visits and race day badges are available.

As a shareholder youmust understand that we cannot guarantee your horses performance, a specific volume of runs (beyond our minimum guarantee if injured) or that runs will be evenly spaced throughout the share period.  This is the chance you take when owning any racehorse and participating in this ownership experience.  If you will be disappointed with only 2-3 runs from your racehorse during the season, then please DO NOT PARTICIPATE IN THIS OR ANY OTHER RACEHORSE, as you could be disappointed.  We believe in being crystal clear with our shareholders - any participation in racehorse ownership is a risk, and we are unable to make any refunds because of share periods which finish early due to injury or retirement - as training, vets and livery fees for the horse still remain whether they are racing or not and part of your lease payment covers the horse's build up to the season.

These risks are the chance all shareholders take, as we do ourselves, when participating in the ownership of a racehorse. By buying a share or gift pack you will be accepting this risk.