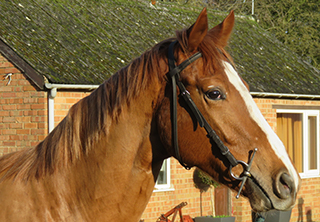 Only 1 share(s) equalling 0.3% is needed to qualify for prizemoney payments from Oh So Risque 2020's racing season.

Gender: Gelding
Birth Year: 2018
Colour/Markings: This gelding is an attractive chesnut colour and has three white socks as well as a large white blaze running down the greater part of his head.
Racing Post Form: View Race History
Racing Code: Flat
Expected to race in: South and Midlands

The mare of this youngster comes from a quality family. All of her siblings won and were rated 75+. She was less prolific on the track, but was sold for £50k as a yearling. This is her first foal.

Outstrip is a young sire, his first crop raced in 2019. He was one of the top first-season sires by number of winners. His progeny ran over five furlongs up to a mile. He was the winner of the Breeders Cup Juvenile as a 2YO and currently stands for 5,000 GBP.

If you are looking for a deeper involvement with Oh So Risque 2020, check out our list of Private Service shares. We may have leases or outright shares available in this racehorse from 4% and above.

This son of Outstrip will race under the name Oh So Risque.

We have been waiting for a while for the right sort of young horse to be available with Derek Shaw, and this gelding by Outstrip immediately took our attention when he hit the ground over a year ago. We are delighted to be offering shares in his juvenile season and just as pleased to be an owner in Derek's yard once again. We have enjoyed a huge amount of success with Derek in the past with a succession of winning horses and can't wait to see what this young horse can deliver.

This 2YO will be racing in 2020 and has been homebred by Derek and his wife, Lyndsey. Derek trained the mare, Divasesque and this chap is her first foal. Outstrip has done well in his first season and tended towards getting early, sprinting sorts which is why this youngster made plenty of appeal for our shareholders.

Because this juvenile is homebred, he hasn't been through the sales. However, his breeding has plenty to get excited about. Although the mare wasn't a winner on the flat during her racing career, she comes from a very successful family. All of her siblings have won races, and are rated in the seventies and eighties. Her mother (Lily Again) won at Listed level and was subsequently highly tried in Group races. Despite this gelding's mother being moderate on the track she has the genes to produce high-quality offspring, which is why she was sold for GBP 50,000 as a yearling.

Derek Shaw stated 'He is a light framed, athletic and showy colt with plenty of size about him. We made the decision to geld him straight away as he was always very active. It's done the trick, he's maintained his forward going nature, but is a much easier horse to deal with now.'

Being by a sire with proven sprinting abilities and out of a sprint-winning mare at two, So Risque has the right background to be a winner as a 2YO. Outstrip was a sensation as a 2YO, winning in Group company in the UK before taking the Breeders Cup Juvenile race in America. On breeding, this gelding should be relatively early but should also be capable of getting further distances as the season develops. Both sides of his family have above-average form from five furlongs to a mile.

Derek says of the So Risque "He's been ridden away and we're just starting to build him up now. He's been cantering at our home gallop and goes nicely. I'm anticipating he will need six furlongs as a starting point, but he is quite sharp, so we could see him over five if he shows the right sort of speed at home."

The gelding is very correct, and one look at him tells you that he's a good-looking individual. Being a chesnut with a big white blaze down his head and nose, he'll certainly stand out in the parade ring. Derek believes this gelding will hitting a track for the first time around May, when the six furlong races for the youngsters start to increase in number.

Derek Shaw: I trained his mother, and she was a lovely horse, but did have a bit of temperament. However, this chap is very straight-forward and so far he's learned everything very quickly. Of course, we haven't pushed the accelerator down with him yet, but I'm very pleased with his progress through the winter.

So Risque is bred to be a two-year-old, as all his mother and father's families have been racing in their juvenile year. We would expect him to start his career local to Derek (based near Melton Mowbray), so he will race at tracks such as Nottingham, Leicester, Doncaster, Chelmsford, Wolverhampton or Yarmouth, but also possibly further afield as well.

The gelding is currently at Derek's yard in Sproxton and has been broken and ridden away before Christmas. After trotting and cantering through January 2020, he will then be built up with the intention to race in the opening stages of the 2020 season. Obviously it's difficult to predict exactly when a horse will be ready to race, but he does strike you as being forward going and his birth date in February 2018 and the fact that Derek feels he may need six furlongs means he should have every chance of starting racing around May time.

We are already reporting on the gelding's progress for shareholders on an ad-hoc basis, reporting on the major breakthroughs with his training - and we will provide regular updates on his progress on the gallops and with his education in detail from January onward. During the heart of the season we publish update reports every 7-10 days, and more regularly when he actively starts racing.

UPDATE JUlY 2020
This youngster is almost ready to race and we expect he will make his debut in July. He is a robust sort and Derek Shaw expects him to stay busy as a 2YO. The pandemic has caused us to re-evaluate the season for our horses, and so we have added an extra TWO MONTHS to all share periods, meaning this horse may well run into November and December, depending on how the season develops.

The race plans for this gelding will be determined by his level of ability shown at home and on the course in 2020. On breeding he should start at five or six furlongs and then will perhaps get further as he develops physically and mentally during the year.

If, as we believe, he shows that he will be a 6f to 7f horse, then there are plenty of races available for him from mid-May onward. We will assess this gelding's progress and if Derek believes he has the right level of ability he may get entries for some of the more prestigious races in the racing calendar.

We provide guarantees with all our racehorses. If this gelding has a season-ending injury and has not already raced twice during the share period, we will replace him with an alternative horse for the remainder of the season. Replacement horses may not be of the same quality, are provided with no further guarantees and no alternative choice can be provided. Prizemoney cannot be paid on any replacements, but all other benefits such as yard visits and race day badges are available.

As a shareholder youmust understand that we cannot guarantee your horses performance, a specific volume of runs (beyond our minimum guarantee if injured) or that runs will be evenly spaced throughout the share period.  This is the chance you take when owning any racehorse and participating in this ownership experience.  If you will be disappointed with only 2-3 runs from your racehorse during the season, then please DO NOT PARTICIPATE IN THIS OR ANY OTHER RACEHORSE, as you could be disappointed.  We believe in being crystal clear with our shareholders - any participation in racehorse ownership is a risk, and we are unable to make any refunds because of share periods which finish early due to injury or retirement - as training, vets and livery fees for the horse still remain whether they are racing or not and part of your lease payment covers the horse's build up to the season.

These risks are the chance all shareholders take, as we do ourselves, when participating in the ownership of a racehorse. By buying a share or gift pack you will be accepting this risk.