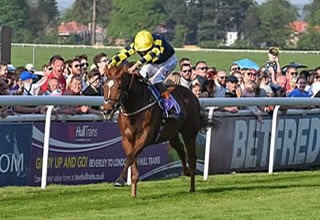 Only 1 share(s) equalling 0.3% is needed to qualify for prizemoney payments from Christmas Night 2021's racing season.

Compton Place is a well-known sire of very decent sprint bred offspring who tend to make good 2YO's and can progress well as older horses. Compton Place himself was a top class sprinter, winning The Group 1 July Cup from Royal Applause as well as numerous other great performances. However, his career as a sire has surpassed his actions on the track, being the sire of horses like 14 times top class winner Borderlescott, as well as Group Class Pearl Secret and Deacon Blues.

This yearling's Dam, Night Haven, won three times as a two and three-year-old, and ended up being rated in the 90's when trained by Michael Bell. She was a five and six furlong sprinter, and was placed in Listed Class. She has had just as much success, if not more, as a broodmare, with nine runners from twelve offspring to have run. Two of her daughters have won in Listed company and one was placed in Group races. This gelding has out-and-out sprint breeding.

If you are looking for a deeper involvement with Christmas Night 2021, check out our list of Private Service shares. We may have leases or outright shares available in this racehorse from 4% and above.

When this gelding went through the sales at Doncaster in 2016, we were expecting that his price would soar into unobtainable heights very quickly, but thankfully, we were able to pick him up at a good value price and bring him back to Malton to join Ollie Pears. Ollie liked Christmas Night as soon as he saw him walking around the parade area. He has an excellent pedigree, from a mare who has already produced two who achieved black type (Listed class placed or winners) and nine individual winners from twelve of her offspring to reach the track. Christmas Night has been no different - he has already won multiple times.

In 2017 this gelding proved himself to be a really robust and consistent horse as a two-year-old and in 2018 he had a terrific year, running over ten times, winning twice and being placed in nine other races. His four-year-old season in 2019 saw him finding things a little difficult against the older horses for a few runs, but after a break and a minor wind operation he flew up the straight at Catterick to record a really great win in September. 2020 saw him start the season with a very decent second placing at Wetherby and he went on to be placed a further three times.

He will be contesting seven furlong race and possibly mile races through 2021 and we\'re pretty certain he will once again provide his shareholders with plenty of fun and enjoyment. He is a really great horse to be involved in, and the syndicate had some superb days out through summer with him, as he is a horse who copes well with firm ground.

Ollie explains "I wish I had a yard full of horses just like him! He is such a tough gelding, taking all of his racing really well. He runs for fun and always tries his best, which is why he gets placed so often. But most importantly, he's also capable of winning."

This son of Compton Place (and known as 'Compton' at home) is sprint bred but proved has proved as an older horse that there is much more to him. His pedigree is littered with winners up to a mile, with nine brothers and sisters who have won over five or six furlongs.

Christmas Night will be a six-year-old in 2020 and will be contesting handicap races throughout the North from early spring through summer, and should run between 4-8 times for his shareholders (and possibly more!). He has a good temperament and has been a really great horse to be involved with, being really robust and capable of taking his shareholders racing plenty of times.

Trained in Malton, East Yorkshire, a well-known training centre for racehorses, we expect this gelding to be racing at tracks such as Newcastle, Catterick, Ripon, Pontefract, Beverley, Nottingham and possibly York, Haydock and Chester. We will be reporting on the gelding's progress for shareholders on an ad-hoc basis from the start of the year, and as soon as we have the early indications of the likely raceplans for the 5YO we will make shareholders aware. Part of the thrill of owning a racehorse is the expectation of the opening run of the season, but shareholders will have the opportunity to see him in the flesh before that first run, as we will hold our spring yard visit to the stables in April or early May (the first of two during the season).

Christmas Night acts on the All-Weather as well as on turf, making him a brilliant choice for shareholders wanting to be part of a syndicate where the horse is almost guaranteed to race plenty of times during the season.

Christmas Night will head straight into handicaps. He was successful in these sorts of races last year and Ollie will place him to make the most of his handicap mark and ability.

There are plenty of races available for him right from the start of the season.  We will assess this 5YO's progress and if Ollie believes he has the right level of ability he may get entries for some of the more higher grade races in the racing calendar.  He ran at seven different racecourses last season.

Your online Racehorse Manager will provide full details of all developments in terms of race planning as the season progresses.

We expect to get 3-6 runs and sometimes more from all our horses per share period, however, you should expect periods of no racing as a result of recuperation from injury or training setbacks.   This share period starts April 1st 2021 and runs through the turf season until November 1st 2021, although we will be reporting on the gelding before the share period starts should we have anything of importance to share with shareholders. We may also start his share period early if he starts by running on the All-Weather.

For our 3YO's and above we offer the following guarantee:  If due to injury or retirement, this gelding's season is cut short and he has not raced at least twice, we will replace him with a similar horse for the remainder of the 2020 turf season. Please note that we are unable to pay prizemoney on any replacements.

As a shareholder you must understand that we cannot guarantee your horses performance, a specific volume of runs (beyond our minimum guarantee) or that runs will be evenly spaced throughout the share period.  This is the chance you take when owning any racehorse and participating in this ownership experience.  If you will be disappointed with only 2-3 runs from your racehorse during the season, then please DO NOT PARTICIPATE IN THIS OR ANY OTHER RACEHORSE, as you could be disappointed.  We believe in being crystal clear with our shareholders - any participation in racehorse ownership is a risk, and we are unable to make any refunds because of share periods which finish early due to injury or retirement - as training and livery fees for the horse still remain whether they are racing or not.  This risk is the chance all shareholders take, as we do ourselves, when participating in the ownership of a racehorse.