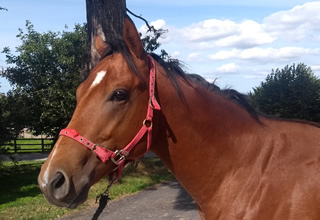 Gender: Gelding
Birth Year: 2018
Colour/Markings: This gelding is like his brother, a dazzling light bay. He has a small white marking on his forehead, just like his brother and one white sock - just like his brother! That said, his sock is on his front-right, not the right-back, like Rory .
Racing Post Form: View Race History
Racing Code: Flat
Expected to race in: North and Midlands

This gelding has a pedigree which screams robustness and the ability to win races. Swiss Spirit has been a successful 2YO and 3YO sire over the last few years and continues to get Group level performers. He was a multiple Group winning and placed sprinter. He has proved himself to be a decent sire with plenty of winners in his first two crops.

Barbieri was a winner of a decent Maiden, and was rated 90 at the end of her two-year-old season. She was retired to stud after her 3YO career and we bought her first offspring, Roaring Rory, who won six times for his shareholders. She has since had two more foals, both of whom have gone on to win multiple times.

If you are looking for a deeper involvement with Ready Freddie Go 2021, check out our list of Private Service shares. We may have leases or outright shares available in this racehorse from 4% and above.

This is a rare opportunity to be part of a syndicate where your horse has already shown a very high level of ability, and displayed the most important quality - the ability to win races! Ready Freddie Go is the type of horse rarely offered in small shares - a dual winner as a 2YO. He won over GBP 10,000 in prizemoney in his first season.

Ready Freddie Go was a standout for us at the Ascot September sales catalogue in 2019, as he is a half brother to a horse we know an awful lot about, Roaring Rory. 'Rory' has won six times for his shareholders over sprint distances and when Ollie Pears saw how this half brother (same mother, different father) was built, he was keen to secure him for us.

The gelding proved to be exactly like his half-brother, only better! He ran an encouraging first race at Newcastle once lockdown allowed racing to commence again, and then went on to never be out of the first few home in all his races as a 2YO. This included winning two Novice races (Beverley and Wolverhampton), showing he is equally at home on the turf and the All-Weather surfaces.

Ollie Pears stated 'I'm so pleased to have this chap back in training for his 3YO campaign. Roaring Rory had a very successful three-year-old campaign, and I know this lad will train on. 2021 should be a good year for him.'

Being by a sire with proven sprinting abilities and out of a sprint winning mare at two, Ready Freddie Go has the right background to be a winner as an older horse. Scuzeme, another of his half brothers, has now won three times (rated 70) and Hamper has won twice over in France, both as a 2YO and 3YO. The family is bursting with winners and all of them take their racing well and run plenty of times each season.

Ollie says of the gelding, "He's a good looking, hard-working horse who loves his work, and like his brother he is a real delight to have around the yard. Just like Rory (Roaring Rory), he isn't massive, but he's strong and forward going. I would be astonished if he wasn't capable of landing a race for us in 2021."

'Freddie', as he's known in the yard was a stable name given to him as soon as he arrived. Chelsea, his stable lass, called him 'Freddie on day one'. This stuck, and so 'Rory' has a brother called 'Freddie'. Being such a laid-back, easy going horse in the stable, but a sharp and forward going horse on the gallops, we decided to give him a fun name which perfectly describes how sharp and willing the youngster is to get with things!

Ollie went on to say 'Freddie did us proud as a 2YO with his two wins. He bumped into a couple of well handicapped horses a couple of times after winning twice, but he's so competitive, I'll be able to find him winning opportunities in decent handicaps next summer.'

Freddie is an out and out sprinter, but may try out six furlongs next season. He will race in Class 3 and Class 4 handicaps, each worth between GBP 5,000 and GBP 15,000 to the winner. This gelding won over GBP 10,000 in prize-money in 2020. We would expect him to race locally to Ollie's yard in North Yorkshire like Redcar, Beverley, Thirsk, Catterick, Chester, Haydock, Pontefract, Carlisle, and Newcastle. However, Ollie is keen to also have a crack at one or two bigger races that could take the 3YO to York, Newmarket, Ayr and Newbury.

Freddie is currently at Ollie Pears' yard in Malton and will over-winter there before getting ready to race in the opening stages of the 2020 season. He loves firm ground, so he may start on the All-Weather surfaces if we have a wet spring.

We we will provide regular updates on Freddie's progress on the gallops and with his training in detail from January 2021 onward. During the heart of the season we publish update reports every 7-10 days, and more regularly when he actively starts racing.

This is a lovely horse to be involved with, being a nice character and having plenty of ability. We are hoping to provide socially distanced visits to the yard for shareholders in spring, once the weather warms up. We have done so successfully at other yards in 2020.

The race plans for this gelding are fairly straightforward as he already has a handicap mark and has proven form over sprint distances. He is currently racing over the minimum trip of five furlongs, but there is every chance he will get further as he develops physically and mentally during the year. We expect Ollie will try six with him at some stage.

Being rated in ther 80's, he will contest valuable handicaps. Ollie is hopeful he can place him to win once or twice before giving the 3YO a target of a more competitive handicap, or even a Heritage handicap, if his handicap mark reaches 90.

There are plenty of races available for him from May onward.  We will assess this gelding's progress and if Ollie believes he has the right level of ability he may get entries for some of the more prestigious races in the racing calendar.

Your online Racehorse Manager will provide full details of all developments in terms of Freddie's progress and race planning as the season progresses.

We expect to get 2-5 runs and sometimes more from all our 3YO horses per share period, however, you should expect periods of no racing as a result of recuperation from injury or training setbacks.

During the season the horse may be rested or have time away from the track to recover and it is quite normal for a flat horse to have periods of 3-6 weeks rest between races. Two and three-year-old horses are particularly susceptible to sore shins, bone chips and growing pains, and can need a greater time to recover between races.

You should be aware that there is a chance that your racehorse may not race at all even though they do not get injured. Around 15% of horses will not reach the racecourse during their season due to non-critical setbacks .

As a shareholder you must understand that we cannot guarantee your horses performance, a specific volume of runs (beyond our minimum guarantee) or that runs will be evenly spaced throughout the share period.  This is the chance you take when owning any racehorse and participating in this ownership experience.  If you will be disappointed with only 2-3 runs from your racehorse during the season, then please DO NOT PARTICIPATE IN THIS OR ANY OTHER RACEHORSE.

We believe in being crystal clear with our shareholders - any participation in racehorse ownership is a risk, and we are unable to make any refunds because of share periods which finish early due to injury or retirement - as training and livery fees for the horse still remain whether they are racing or not and part of your lease payment covers their 5 month build-up to the season.