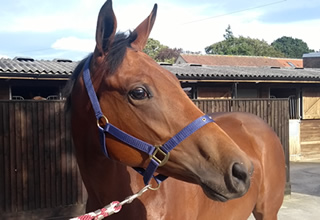 Only 1 share(s) equalling 0.3% is needed to qualify for prizemoney payments from Crown Princess 2021's racing season.

Gender: Filly
Birth Year: 2018
Colour/Markings: This has a lovely light bay colour, with no major white markings at all on her head (just like her father). She has two white socks, on both right front and back legs - her father had one on his back right leg.
Racing Post Form: View Race History
Racing Code: Flat
Expected to race in: North and Midlands

This youngster comes from a winning family which includes a large number of Group race winning relatives. Her family includes Moth Ball (Uncle to this filly) who won over £135k and won the Rockingham at York. Her dam was only raced once in a hot maiden.

Mehmas was the top first season sire and now stands for £7,500. Some of his offspring have sold for £100k+. He was a talented 2YO sprinter, winning two Group 2's including the July Stakes. His top rated 2YO in 2020 was the Group 2 winning Supremacy (rated 115).

If you are looking for a deeper involvement with Crown Princess 2021, check out our list of Private Service shares. We may have leases or outright shares available in this racehorse from 4% and above.

Ollie Pears believes that if it wasn't for the Covid-19 lockdown, this Mehmas filly would have won even more races as a 2YO. She was a very sharp youngster, and even after the three month delay managed to rack up a win and two placed efforts before the end of July.

This filly is by Mehmas, a top-class sprinter who is likely to be the leading first season sires in 2020. His progeny have been much sought after since the start of the 2020 season. Crown Princess showed she not only possesses speed, but is also robust, running frequently and consistently to a high level.

Ollie told us "She is such a good-looking filly and has a great temperament. She tries hard, and enjoyed a proper 2YO season once the racing got going. She's never been far away in her races and as long as the handicapper is fair with her handicap mark, we will certainly enjoy more wins with her."

Ollie Pears stated: "She doesn't give up, and the strength of her form is there for all to see. She won her Novice race in good style, and was then second to a horse who subsequently went into Class 2 and Listed races."

Crown Princess ran three times over five furlongs, recording fast times and never being beaten more than a couple of lengths. She subsequently stepped up in trip and we are looking forward to her racing over five and six furlongs through 2021. Ollie Pears has placed her well in her 2YO career, and the filly hasn't been over-raced, so there will be plenty of enthusiasm left for her 3YO season.

The other important point to make about this filly is that she has already shown an exceptional calmness and easy-going temperament. Even after only a day at Ollie's yard the filly was being petted and nosing into us in her stable. She always goes into the stalls without any issues and jumps really well from them - a prerequisite for any sprinter

"This filly has a touch of class about her. She still has bags of scope and has already shown she has what it takes to win races. If all goes well, she could be contesting some tasty fillies handicaps through 2021" Ollie told us.

Ollie Pears commented "We will give her plenty of rest over christmas and then get her going in February so she will be ready to race at the start of the new season. Hopefully by that stage we'll be over the worst of Covid-19 and we can look forward to a proper turf season with her with shareholders enjoying a day out at the track."

Ollie went on to state: "She's very straight-forward and the plan will be to get an initial run in handicap company into her and then start picking off races as they come. If she can improve, then we can aim for some better class races as well. Her form has her on the cusp of 0-90 rated company, so it's not beyond the realms of possibility that we could be having a tilt at 3YO only Class 2 handicaps off a low weight. "

Crown Princess is currently at Ollie Pears' yard in Malton and after finishing her 2020 season will get two months off.  After trotting and cantering in late January/February she will have a short rest before getting ready to race in the opening stages of the 2021 season.

We will be posting updates on the filly's progress for shareholders on an ad-hoc basis through the late winter months, reporting on the major breakthroughs with her training - and we will provide regular updates on her progress on the gallops and with her education in detail from March onward. During the heart of the season we publish update reports every 7-10 days, and more regularly when she actively starts racing.

If everything goes to plan, and Crown Princess is in good health both mentally and physically, she will start racing in April/May and then race regularly through the summer. She likes fast ground, so racing in July and August can be expected.  We anticipate between 4 and 8 runs from this filly this season, and she will most likely race around the Yorkshire, Lancashire and North Eastern racetracks. She may travel further north or south if the right racing opportunity presents itself.

The race plans for this filly will be determined her final handicap rating earned on the racecourse through 2020.  She is a five and six furlong horse, and at the time of writing, rated 73. We expect she will be competing in Class 4 and Class 5 handicaps in the 0-75 to 0-85 category. Trainer Ollie Pears has brought this filly along a step at a time, ensuring she can step forward with every race, which has resulted in the filly never finishing out of the first three in her opening trio of races.

Crown Princess is still not fully exposed, and we will be seeking to continue her rise up the handicap ratings. If she is good enough, this could mean she can qualify for conditions and even listed races at some point. Even if that's not possible, she will be competing for decent prize-money in handicap company.

There are plenty of races available for her from late April onwards.  We will assess this filly's progress and if Ollie believes she has the right level of ability she may get entries for some of the more prestigious races, including the possibility of racing at higher prestige venues such as York, Haydock and Doncaster.

We expect to get 2-5 runs and sometimes more from all our horses per share period, however, you should expect periods of no racing as a result of recuperation from injury or training setbacks.  This share period starts proper at the start of the turf season on April 1st 2021 and runs through the turf season until November 1st 2021, however we will be reporting on the filly before the share period starts (from January 2021) should we have anything of importance to share with shareholders.

During the season the horse may be rested or have time away from the track to recover and it is quite normal for a flat horse to have periods of 3-6 weeks rest between races. All horses are susceptible to sore shins, bone chips and growing pains, and can need a greater time to recover between races.

We provide guarantees with all our racehorses. If this filly has a season-ending injury and has not already raced twice during the share period, we will replace her with an alternative horse for the remainder of the season. Replacement horses may not be of the same quality, are provided with no further guarantees and no alternative choice can be provided. Prize-money cannot be paid on any replacements, but all other benefits such as yard visits and race day badges are available.

You should be aware that there is a chance that your horse may not race at all. Around 15% of all horses will not reach the racecourse during any one season.

As a shareholder you must understand that we cannot guarantee your horses performance, a specific volume of runs (beyond our minimum guarantee) or that runs will be evenly spaced throughout the share period.  This is the chance you take when owning any racehorse and participating in this ownership experience.  If you will be disappointed with only 2-3 runs from your racehorse during the season, then please DO NOT PARTICIPATE IN THIS OR ANY OTHER RACEHORSE, as you could be disappointed.  We believe in being crystal clear with our shareholders - any participation in racehorse ownership is a risk, and we are unable to make any refunds because of share periods which finish early due to injury or retirement - as training and livery fees for the horse still remain whether they are racing or not and part of your lease payment covers the build up to the season.