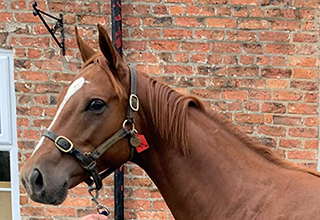 Only 1 share(s) equalling 0.2% is needed to qualify for prizemoney payments from Sky Knight 2021's racing season.

Gender: Gelding
Birth Year: 2019
Colour/Markings: This gelding is a proper chestnut with a white blaze running down his forehead. He has one white sock.
Racing Post Form: View Race History
Racing Code: Flat
Expected to race in: North and Midlands

This good-looking chestnut is similar in stature to his father, Free Eagle, who was a top performer over a mile and ten furlongs, winning and being placed in Group 1 company. His stud fee is currently 12,500 euros.

Sassy is stoutly bred, and she was a dual winner in France over seven furlongs. She had two of her offspring run, one of which was rated in the 60's. The other has won twice over six furlongs.

If you are looking for a deeper involvement with Sky Knight 2021, check out our list of Private Service shares. We may have leases or outright shares available in this racehorse from 4% and above.

Our syndicates have enjoyed plenty of success with Ollie Pears over the last few years, especially with our two-year-olds. Working with a limited budget, Ollie had managed to find us winners up to Class 2 and 3 grade, and also horses that train on as three-year-olds and older. Sky Knight fits the mold of a 'Pears purchase', as he is compact and powerful, and walks and trots really well. However, Ollie is also adept at finding horses with great attitudes (such as 3-time winner Harry Love and 2-time winner Ready Freddie Go) and this gelding is no different.

Ollie told us "Sky Knight impressed me at the Tattersalls September sales with the way he dealt with everything that day, and he took the traveling to Malton in his stride as well. He is well put together and I'd describe him as a 'racey' type. He seems to want to get on with things and so far hasn't put a foot wrong."

Ollie went on to say "Sky Knight has six furlong and mile form in his pedigree. Free Eagle, his sire was a Group winner over a mile, but this chap strikes me as the sort who will start at six and then go up in trip as he matures."

"Sky Knight has a lot going for him and it will be fascinating to see how he develops over the winter. He has really great legs and he has very similar markings to his sire."

Sky Knight's breeding backs up Ollie's view of this gelding. His father was top class, and stands for 12,500 euros because he has already proven himself as a decent source of top quality offspring. His mother won several times over seven furlongs in France and he has a brother and sister who between them have won over six furlongs and proven themselves over further as they got older.

We like Sky Knight a lot. He is quite a 'busy' sort and has been well handled by his breeder. Prospective shareholders should be aware that Free Eagle youngsters tend to excel in the second half of the first racing season, being much better once the race distances for 2YO's get to six and seven furlongs.

This chap is known as 'Eddie' in the stables (derived from Eddie the Eagle). We're hoping he will have his namesake's grit and determination, and the speed to go with it!

This gelding's grandam, Missy Dancer, was a Group class performer in Europe and went on to produce a number of quality racehorses, including Class 1 and Group contenders. Sassy was a robust racehorse who ran regularly through her career and she was a decent sort (equivalent to a 70-80 rated horse in the UK), capable of winning.

"The Free Eagle and Sinndar combination on the mare's side would tend to suggest stamina for this youngster, but there is plenty of six furlongs to mile form in both sire's offspring and his physical shape suggests to me that he will be plenty sharp enough to make a proper 2YO, and with the added bonus that he is almost certainly capable of maturing and becoming a proper 3YO." stated Ollie Pears.

Ollie Pears noted: "I wouldn't like to guess whether Sky Knight will be a sprinter or a miler in his debut season, but at the moment I would expect him to follow exactly the same path his mother did, and start at six. It will all depend on how he develops over the winter.

Ollie added "He walks and trots well and has settled into the yard nicely. He'll be broken in the next fortnight and we'll have him ridden away before Christmas. We'll know what we've got in February or March. He's actually got far more going for him than most at this stage, and that can only be positive."

Ollie went on to state "He is a good-looking chestnut and well proportioned. I'd expect him to lengthen and I'd love to take him to York for the Rous Stakes in June if everything works out for him."

This gelding is currently at Ollie Pears' yard in Malton and will be broken in before November and then enter full training straight afterwards. After trotting and cantering in December, he will have a short rest before getting ready to race in the first few months of the 2021 season.

We are already reporting on his progress for shareholders on an ad-hoc basis, updating them on the major breakthroughs with his training - and we will provide regular updates on his progress on the gallops and with his education in detail from January onward. During the heart of the season we publish update reports every 7-10 days, and more regularly when he actively starts racing.

If everything goes to plan, and the gelding is far enough forward both mentally and physically, he will start racing in May or June - although this could slip to June or July if he grows considerably through the winter. He will get plenty more gallop experience up the 'Wold Gallop' at Malton and will be race right through summer 2021. We expect between 3 and 7 runs from this colt this season, and he will most likely race around the Yorkshire, Lancashire and North Eastern racetracks.

Although purchased as a colt he was gelded in November 2020 as it is highly unlikely he would become a sire. Geldings benefit from having more paddock time, suffer less from anxiety, and also become easier to handle in and around the stables.

The race plans for this youngster will be determined by his level of ability shown at home and on the course in 2021.  On breeding he should start at six furlongs and then will perhaps get further, most likely sevn or a mile, as he develops physically and mentally during the year.

The standard route of a horse of this type will be to start in Maiden (races for horses who have yet to win a race) or  Novice/Auction or Selling/Claiming races (2YO only races where previous winners get extra weight) and her performance in these first three of four races will determine whether he goes into nursery handicaps, or is good enough to tackle conditions races or even step into pattern races (high value, prestige races).

If, as we believe, he is sharp enough for six furlongs, Ollie may target him at the Rous Stakes at York in June. Then there are plenty of races available for him from late April onwards.  We will assess this chap's progress and if Ollie believes he has the right level of ability she may get entries for some of the more prestigious races in the racing calendar.

We expect to get 2-5 runs and sometimes more from all our 2YO horses per share period, however, you should expect periods of no racing as a result of recuperation from injury or training setbacks.  This share period starts proper at the start of the turf season on April 1st 2021 and runs through the turf season until November 1st 2021, however we will be reporting on the filly before the share period starts (from January 2021) should we have anything of importance to share with shareholders.