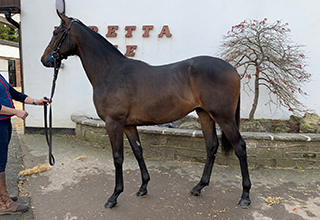 Only 1 share(s) equalling 0.3% is needed to qualify for prizemoney payments from Byhookorbycrook 2021's racing season.

Gender: Colt
Birth Year: 2019
Colour/Markings: This colt is dark bay in colour. He has no distinguishing marks, apart from a small shade of white on his nose.
Racing Post Form: View Race History
Racing Code: Flat
Expected to race in: South and Midlands

This colt was well bought at the sales. He has a half-sister who was fifth in the 1000 Guineas in 2020. There are two other brothers, both of whom won as 2YO's and also a half-sister who has only run three times, but is already rated 67.

Garswood has established himself as a major influence on the speed of his progeny. He was a champion sprinter in France and has been a successful sire of Group winners, generally over sprint distances. His offspring tend to be robust.

If you are looking for a deeper involvement with Byhookorbycrook 2021, check out our list of Private Service shares. We may have leases or outright shares available in this racehorse from 4% and above.

Trainer Adam West really hit the jackpot with this son of Garswood at the Tattersalls Book three sales. This half brother to Romsey (Listed winner and fifth in the 1,000 Guineas this season) was incredibly good value and we were delighted to be able to syndicate him.

Adam was immediately offered profit on the youngster after he bought him, but we were able to secure him for £8,500

"He's like a tank," Adam told us, "I can't believe we were able to secure him for so little, as I was expecting to go much higher for him. he has plenty of size about him, has a good head and is already half-way to being a racehorse already."

Given a stable name of 'Gary' as the staff felt that 'Gary Garswood' made him sound like a pop star, the colt has settled into life at Lorretta Lodge stables already. However, Adam was really keen on the saying 'by hook or by crook' for the colt, and we were pleased when the BHA approved it as his racing name. The saying means that by whatever means possible, you will get the job done. The words of his name are run together because otherwise we would have been above the 18 characters the BHA allow for each racing name.

"He's one of the nicest youngsters I've bought but certainly not the most expensive!' Adam joked, 'Every one of his family has proved to be a decent racehorse, with two of his siblings being rated 80+. "

Adam pointed out that Romsey, this colt's half sister was also a cheap purchase at the sales, yet she has won in Listed company and was close up in this year's 1,000 Guineas. However, he also made us aware that when crossed with the Green Desert line, Garswood has produced two of his top individuals.

Adam said, "It's not just his pedigree, this colt really does have the stamp of a sprinter and is very forward. He only took a few days to break and has proved to be a straight-forward individual."

Byhookorbycrook is trained in Surrey by Adam West, who is a young, aspiring trainer based in a famous racing yard - Loretta Lodge in Epsom. Adam told us after he'd bought him, "Everything is pointing to this chap being an early sort. He is already well-muscled and if everything goes to plan over winter I expect he could be one of our first 2YO's racing in the 2021 season."

This youngster will probably start at a distance of five furlongs and could be going up to six furlongs by the end of his first year in training. He is bred to be a sprinter, and two of his three siblings won as 2YO's. We are hoping he will be similar to his half-sister and prove that his cost at sale was well below his actual ability. Romsey was sold for only 800 guineas and has already earned GBP 56,000 in prize-money.

"He could be very sharp. Everything at the moment points to him being an early-season sort. However, we'll see how he over-winters and plan his campaign accordingly." commented Adam.

We are really hoping Byhookorbycrook will see a racetrack early in 2021. However, potential shareholders should be aware that you can never legislate for how a horse may grow, develop or indeed have setbacks. Adam tends to bring his 2YO's along in their own time, but isn't afraid of racing them against top-class animals. So shareholders are likely to see a couple of runs before the true potential of this youngster is realised.

Adam has bought extremely well for us this autumn, and Byhookorbycrook is another really interesting sort who could have a touch of class. He will be broken and ridden away before Christmas and then brought on in the new year before heading to a racetrack in the south for the first time sometime between April and June. Your Racehorse Manager account will keep you up to date with any major milestones the youngster reaches and of course we will be reporting regularly from March onward, when we will get a feel for the type and quality of racehorse he is likely to become.

Covid-19 restrictions allowing, we will be holding a spring yard visit, ideally before the colt runs his first race. We managed to hold socially distanced visits to Adam's yard in September 2020 which proved very popular with our shareholders.

The race plans for this colt will be determined by his level of ability shown at home and on the course in 2021.  On breeding he should start at five furlongs and then will perhaps get further as he develops physically and mentally during the year.

Please note that this horse may be gelded, either before the season starts or during the season, should his trainer feel it's in the best interests of the horse.

If he shows the need for longer distances at home, he may have to wait for the seven furlong races a little later in the season.  However, we will assess this colt's progress and if Adam believes he has the right level of ability he may get entries for some of the more prestigious races, including valuable sales races, in the racing calendar.

Your online Racehorse Manager will provide full details of all developments in terms of the horse's progress and race planning as the season progresses. However, being southern-based, we do expect this colt will race at tracks like Kempton, Sandown, Lingfield, Newbury, Bath, Chelmsford, or Windsor.

We expect to get 2-5 runs and sometimes more from all our 2YO horses per share period/season, however, you should expect periods of no racing as a result of recuperation from injury or training setbacks. This share period starts proper at the start of the turf season on April 1st 2021 and runs through the turf season until November 1st 2021, however, we will be reporting on the horse before the share period starts (from January 2021) should we have anything of importance to share with shareholders.

We provide guarantees with all our racehorses. If this horse has a season-ending injury and has not already raced twice during the share period, we will replace him with an alternative horse for the remainder of the season. Replacement horses may not be of the same quality, are provided with no further guarantees and no alternative choice can be provided. Prize-money cannot be paid on any replacements, but all other benefits such as yard visits and race day badges are made available.

As a shareholder youmust understand that we cannot guarantee your horses performance, a specific volume of runs (beyond our minimum guarantee if injured) or that runs will be evenly spaced throughout the share period.  This is the chance you take when owning any racehorse and participating in this ownership experience.  If you will be disappointed with only 2-3 runs from your racehorse during the season, then please DO NOT PARTICIPATE IN THIS OR ANY OTHER RACEHORSE, as you could be disappointed.  We believe in being crystal clear with our shareholders - any participation in racehorse ownership is a risk, and we are unable to make any refunds because of share periods which finish early due to injury or retirement - as training, vets and livery fees for the horse still remain whether they are racing or not and part of your lease payment covers the five months of pre-season training.