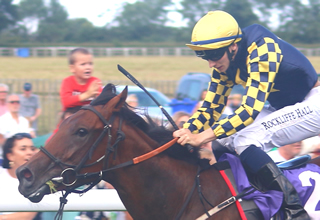 Only 1 share(s) equalling 0.3% is needed to qualify for prizemoney payments from Harry Love 2022's racing season.

Gender: Gelding
Birth Year: 2017
Colour/Markings: This gelding has a lovely light bay colour, and is very similar in shape and colouring to his sire, Lawman. Like his sister, he has white socks - she has two - he has three.
Racing Post Form: View Race History
Racing Code: Flat
Expected to race in: North and Midlands

Harry Love is the second foal for his dam, who was un-raced and comes from a winning family which includes a large number of Group race-winning relatives. It's not unusual for a breeder to keep a good-looking filly un-raced and place them straight in as a broodmare when the family is strong, and this filly's own Mother was un-raced, but has bred a winner from only two runners so far. The family includes Rosinka (Aunt to this colt) who won over $350k in America in Group company, and herself has produced a Group race winner. Gimmick's first foal, Queen Of Scheme won as a 2YO.

Lawman is a proven Group One sire. In fact, this colt has the similar breeding lines as his top-performing offspring, Harbour Law (Pivotal as a grand-dam) who won the St Ledger and was third in the Gold Cup in 2018. Â He stands for Â£15000.

If you are looking for a deeper involvement with Harry Love 2022, check out our list of Private Service shares. We may have leases or outright shares available in this racehorse from 4% and above.

This gelding was our standout youngster for 2019. Not only did he win twice, but he was placed in all his runs, earning over GBP 10,000 in prize-money and finishing his juvenile season on a rating of 82. He continued to impress in 2020 with another win (Winning at odds of 50/1) and similar prize-money earnings.

We are delighted to be offering Harry Love for syndication once again for his five-year-old season. On this day, he is capable of producing a stunning turn of speed and winning his races in a matter of strides and to date he has won every season apart from 2021, where he had to start his season late due to striking into himself. He has proven form, and has recorded facile victories over seven furlongs and a mile in a Class 4 events.

Ollie says of Harry Love "He is a proper racehorse. Probably the best two-year-old I'd trained for five seasons until Reday Freddie Go came along. He has won his two 2YO and 3YO races really well and earned a very respectable mark in the 80's as a result."

"He's matured into a really nice horse, and after his minor wind operation he proved he is going to be a proper threat in the Class 3 and 4 divisions over seven furlongs and a mile. We'll be heading for more races of this quality in 2022."

Harry Love is quite a 'busy' sort and just like his sister (who we also owned and syndicated), shareholders should be aware that we expect this son of Lawman to have a busy season in 2022 where he may contest races averaging 10k in prizemoney each. If everything goes to plan, Ollie will pick off handicaps with him and aim for one or two bigger prizes with him during the season.

'Harry' has already proved himself to have plenty of ability. 2021 was a tough year for the gelding, as he suffered an injury to his ankle when over-reaching in April. He had an operation to remove a small 'spur' of bone that had been dislodged on his heel and returned to action in mid-summer. It has taken a few races for him to find his feet again, but he will no doubt hit his stride in the autumn.

The plan is to race Harry up to Christmas and then he'll get a three month break before being readied for the 2022 season on the turf.

Regarding Harry Love's pedigree, trainer Ollie Pears stated: 'Rosinka was a Group 3 race winner (also 2nd in a Group 1) and also won as a 2YO. She has proved to be a highly successful broodmare, with three winners from five runners, one of which is Move Up (rated 115 and group 2 winner)'

Harry Love's latest win came at long odds that day at Beverley (shareholders enjoying a 50/1 winner), running over seven furlongs. He proved he retained ability and was subsequently rated in the eighties. He also won over a distance which showed he would be able to have the stamina for a mile, opening up the racing opportunities for him.

Ollie added: "He has impressed me ever since his first gallop at home, and I wasn't too surprised when he went and won at big odds. He's the sort of horse who is perfect for handicaps, as he either tends to win, or is down the field - which means he soon returns to a winning mark after a big win."

Ollie went on to state "His sister trained on as a three-year-old so it wasn't a shock when he confirmed this himself, although I am constantly surprised that the bookies let him run off such big prices."

Harry Love will race through autumn and then have a two or three month break before Ollie gets the gelding ready for his 2022 season. Injury meant he had an interrupted season in 2021, but Ollie is hoping to have Harry out early in 2022. Now he has proven form over seven and a mile, Ollie is keen to ensure Harry can contest the better races for older horses and be placed to potentially benefit from very decent prize-money.

We will report on the gelding's progress for shareholders on an ad-hoc basis in early 2022, reporting on the major breakthroughs with his training - and we will provide regular updates on his progress on the gallops in detail from March onward. During the heart of the season we publish update reports every 7-10 days, and more regularly when Harry actively starts racing in spring.

This is an opportunity to become involved in a horse with proven ability at a very decent level with good prize-money. He is no stranger to the winners' enclosure and we expect to contest a high profile race at a quality racetrack or two during the season. That said, he will undoubtedly return to Beverley as well, the scene of two of his wins.

We have sold out of shares in Harry Love every season. Shares in this gelding will be limited, as many of his shareholders renew their ownership each season, and are given preference over shares. Only 25 shares have been made publically available in Harry Love for his 5YO season.

UPDATE JUNE 2022
Harry has done everything except record a win this season so far. He has been third twice and second once from only four runs and continues to be highly competitive..

The race plans for this gelding are to contest seven furlong and mile handicaps in the first two months of the season, hopefully, win a couple, and then step into the bigger, more lucrative Class 2 and 3 contests. However, along the way, Ollie is expecting to have a tilt at one or two better-class handicaps.

We expect to get 2-5 runs and sometimes more from all our older horses per share period, however, you should expect periods of no racing as a result of recuperation from injury or training setbacks. This share period starts proper at the start of the turf season on April 1st 2022 and runs through the turf season until November 1st 2022, however, we will be reporting on the gelding before the share period starts (from January 2022) should we have anything of importance to share with shareholders.

During the season the horse may be rested or have time away from the track to recover and it is quite normal for aÂ flat horseÂ to have periods of 3-6 weeks rest between races. All horses are particularly susceptible to sore shins, bone chips and growing pains, and can need time to recover between races.

You should be aware that there is a chance that your racehorse may not race at all even though they do not get injured. Around 15% of racehorses will not reach the racecourse during any given season for a variety of reasons. Your guarantee covers a season ending injury, not any ongoing issue that stops the horse from racing.

As a shareholder you must understand that we cannot guarantee your horses performance, a specific volume of runs (beyond our minimum guarantee after an injury) or that runs will be evenly spaced throughout the share period. This is the chance you take when owningÂ any racehorse and participating in this ownership experience. If you will be disappointed with only 2-3 runs from your racehorse during the season, then please DO NOT PARTICIPATE IN THIS OR ANY OTHER RACEHORSE, as 20% of horses run 1-3 times during a season. We believe in being crystal clear with our shareholders - any participation in racehorse ownership is a risk, and we are unable to make any refunds because of share periods which finish early due to injury or retirement - as training and livery fees for the horse still remain whether they are racing or not and part of your lease payment covers the five-month build-up to the season.