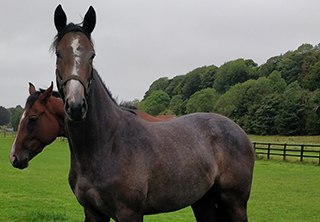 Only 1 share(s) equalling 0.75% is needed to qualify for prizemoney payments from Qwicken 2022's racing season.

Qwicken is by the multiple Group 2 winning sire Gutaifan, who was retired after his 2YO season, rated 114. He has had two successful years as a sire, already responsible for Group 2 and Listed winners. He stands for 6,000 euros.

Miss Wicklow was unraced, but comes from a family where all seven of her half brothers and sisters won races. She has had two previous foals, with Miss Tiche having earned Â£37,000 in prize-money in her first two seasons in France and Ocean Star an 80 rated 2YO who has won and been placed twice in 2020.

If you are looking for a deeper involvement with Qwicken 2022, check out our list of Private Service shares. We may have leases or outright shares available in this racehorse from 4% and above.

Ollie Pears has managed to find our shareholders some really great young filly's in the last few years and this daughter of Gutaifan has already got some nice form in the book.

Qwicken kicked off her 2YO season with a second placing at odds of 125/1 at Thirsk. Completely unfancied by the form pundits, she ran on well up the stands rail to chase home a horse that had been well back and went on to run at Royal Ascot.

She then went to Carlisle and finished a close-up fourth in a race that has subsequently proved to be full of horses rated from 70 to 85. Her season then went a little downhill with two disappointing runs, but this was due in main to her dislike for fast ground and the fact that she started to grow significantly during the summer. It was decided in early autumn to back off the filly, as she kept on hitting growth spurts that made her go 'leggy' and unbalanced.

Qwicken has all the hallmarks of a horse who will stay distances of up to a mile in time. Â Ollie Pears was pleased to have her knocked down to him at the Ascot Sales because she is very well proportioned, has a good eye, and made up into a good-sized 2YO in summer 2021. Â She has subsequently grown tall and Ollie is looking forward to her 3YO season, as she will have another winter under her belt and will have filled out and be a much stronger filly.

Ollie told us "Qwicken had a standard 2YO season, where she showed plenty of quality, but because she was going through growth spurts it became difficult to catch her balanced. You can see at Ripon she couldn't handle the undulations and her other run was on ground far too firm for her. I believe she will leave both those races well behind her in time.

When you consider both the filly's brother and sister have won and are rated 70 plus, and then look at her performances when finishing second and fourth, you can see that when she has grown into herself, she will be a proper racehorse.

Ollie explained, 'I expect her to get plenty of grass through autumn and we'll see how she winters. She should balance out in the spring and I could see her going for a spin or two on the All-Weather before the turf season starts.'

"Qwicken is good looking and will continue to grow into a very scopey filly. In fact, I won't be surprised if she leaves all her 2YO form well behind her when she steps up in trip - she's already shown plenty of stamina on the gallops at home," Ollie Pears stated.

Prospective shareholders should be aware that this filly is from a family of winners who all started at sprint distances but went up in trip as they got older.Â

Ollie Pears told us "Qwicken was a little shy and timid at times when she first arrived, but she is gaining confidence all the time. I know she has wins in her, and It'll be my job to bring them out of her as a three-year-old."

Ollie went on to state "There will be plenty of races available for a horse with her sort of rating - we can go all the way from 0-65 up to 0-75 if needs be. I think she is on a very workable mark and we can work her up the ratings as the season unfolds."

'Gucci' will over-winter at the Ollie Pears' yard in Malton and will get complete rest and recuperation until Christmas time. Â After trotting and cantering in December, she will have a short rest before getting ready to race in the opening stages of the 2022 season.

We will be reporting onÂ the fillysÂ progress for shareholders on an ad-hoc basis through winter, reporting on the major breakthroughs with her training - and we will provide regular updates on her progress on the gallops and with her education in detail from January onward. During the heart of the season we publish update reports every 7-10 days, and more regularly when she actively starts racing.

IfÂ everything goes to plan, and Qwicken is far enough forward both mentally and physically, she will start racing in April/May and possibly slightly earlier if Ollie thinks she is ready. Â We expect between 3 and 7 runs from this filly this season, and she will most likely race around the Yorkshire, Lancashire, and North Eastern racetracks.

UPDATE JUNE 2022
Qwicken showed she has trained on with a battling third placing in a Maiden at Catterick in May. She has also shown speed, and we expect to see her racing over a shorter trip in the coming months.

The race plans for this filly will be determined by the level of ability shown at home and on the course.

We expect the filly to run early in the season, possibly even on the All-Weather before the turf season commences in April, as she has shown a preference for softer ground. She already has a handicap mark of 62 and Ollie believes this is very workable.

Depending on her performances earlier in the season, Qwicken will then be aimed at 3YO only handicaps and then possibly 3YO+ all-age handicaps as the season develops. She will race in the North and shareholders an expect to see her race at venues such as Thirsk, Redcar, Carlisle, Wolverhampton, Southwell, and Newcastle.

We expectÂ to get 3-6 runs and sometimesÂ moreÂ from allÂ our 3YO horses per share period, however, you should expect periods of no racing as a result of recuperation from injury or training setbacks.Â Â This share period starts proper at the start of the turf season on April 1st 2022 and runs through the turf seasonÂ untilÂ November 1st 2022, however, if the filly starts early on the All-Weather we will start her share period early for shareholders. We will be reporting on the filly before the share period starts (from January 2021) should we have anything of importance to share with shareholders.

During the seasonÂ the horse may be rested or have time away from the track to recover and it is quite normal for aÂ flat horseÂ to have periods ofÂ 3-6 weeks rest between races. Young horses are particularly susceptible to sore shins, bone chipsÂ andÂ growing pains, and can need a greater time to recover between races.Â Â Â

We provide guarantees with all our racehorses. If this filly has a season-ending injury and has not alreadyÂ raced twiceÂ during the share period, we will replace her with an alternative horse for the remainder of the season. Replacement horses may not be of the same quality, are provided with no further guarantees and no alternative choice can be provided. Prizemoney cannot be paid on any replacements, but all other benefits such as yard visits and race day badges are available.

As a shareholder youmustÂ understand that we cannot guarantee your horses performance, a specific volume of runs (beyond our minimum guarantee) or that runs willÂ be evenly spaced throughout the share period. Â This is the chance you take when owningÂ any racehorse and participating in this ownership experience. Â If you will be disappointed with only 2-3 runs from your racehorse during the season, then please DO NOT PARTICIPATE IN THIS OR ANY OTHER RACEHORSE.

We believe in being crystal clear with our shareholders - any participation in racehorse ownership is a risk, andÂ we areÂ unable to make any refundsÂ because of share periods which finish early due to injury or retirement - as training and livery fees for the horse still remain whether they are racing or not and part of your lease payment covers the build up to the season.Â

UPDATE JUNE 2022
This filly has already run several times this season and so the above guarantee is no longer required for 2022.