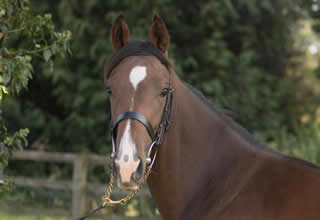 Only 1 share(s) equalling 0.25% is needed to qualify for prizemoney payments from Daphne May 2022's racing season.

Gender: Filly
Birth Year: 2018
Colour/Markings: This filly is medium bay in colour. She has a lot of white running down her forehead and onto her nose and both back feet have a ring of white.
Racing Post Form: View Race History
Racing Code: Flat
Expected to race in: South and Midlands

Mayson has proved to be a very decent sire over the last three years with plenty of black type and group winners to his credit. He stands for Â£6,000 and is the budget option for people wanting to mate into the Invincible Spirit line (who stands for Â£100k).

If you are looking for a deeper involvement with Daphne May 2022, check out our list of Private Service shares. We may have leases or outright shares available in this racehorse from 4% and above.

This daughter of Mayson was a horse that trainer Adam West liked a lot at the Doncaster Silver Sales in 2019. He was taken by the way the filly strode out and how well boned she was. His faith in her was repaid, as the filly has shown plenty of potential on the racecourse.

Daphne May was another shrewd purchase for us by Adam. The filly has been placed in all but a few of her runs to date and has already won twice in Novice races and once in a handicap. Adam thinks a lot of this filly, believing she may be capable of gaining some black type as a 4YO. Her 3YO season saw her blossom into a very decent handicapper.

Adam commented, "We think an awful lot of Daphne, and the best is certainly yet to come. She finished off her 2YO season with two wins, and I'm hoping to complete her 2021 season with another win before we give her a rest over winter."

Named Daphne May due to her breeding (by Mayson and also foaled in May and Daphne named after Adam's Grandmother) she comes from a family of winners, from sprint distances up to a mile. The fact Adam wanted his Grandmother's name as part of her racing name is a testament to how much he likes this filly! Her full sister, Melonade, was a solid mid-seventies horse who won twice as a juvenile over five and six furlongs. Her half brother (Woodside Wonder by Camacho) has won three times and been placed a further seven times. He is still racing and is consistently rated in the seventies to eighties.

This filly is a good size and moves well. As a youngster she did suffer from getting jarred up in her knees every now and again, but this has reduced significantly as she has grown older. Daphne May is a substantial filly, already well over sixteen hands and we've never had any more than minor issues with her health.

Adam West has trained her throughout her career and in the process has got to know the filly extremely well. He recently told us 'She is known as 'Ada' in the stables and is a really good filly to ride at home. On the track she tends to be very keen in the races, so we have to employ intelligent jockeys who are capable of switching her off and allowing her to come with a sustained run in the last couple of furlongs.

Adam noted, "She has shown plenty of ability, both at home and on the track in 2021, but especially when winning at Windsor in an all-age handicap. She was the outsider on that occasion and I was really pleased with her because it showed that when she gets a proper pace to run against, she's a big threat to all the horses she races against. Her 3YO season has been the making of her and I think she will consolidate this as a 4YO."

Daphne May will be available to view at our Spring yard visits by her shareholders, prior to going racing in 2022. We held four visits to the Adam West yard in 2021 and expect to do the same in 2022.

"She's a nice horse with a nice way about her. The plan will be to have her ready early in 2022 because she will like the softer ground the spring can offer. I'd hope we can pick off a race or two by high summer and then do the same in Autumn," Adam told us.

We are really hoping Daphne May will see a racetrack early in the 2022 turf season. She prefers ground with a bit of give in it, so expect to see her avoid very hard or firm going. There is a chance she will race on the All-Weather surfaces as well - in order to keep her racing when the summer months make finding good or softer going difficult.

UPDATE JUNE 2022
Daphne May started her season with a WIN, and since then has also been placed. A couple of her runs have been affected by poor draws and unforgiving goings, but she is having her usual successful season. We expect to see her racing again in July and run right through to November.

During 2020 Daphne May showed ability and was given a handicap rating of 61. This rose considerably as a result of two fine wins at the end of her 2YO season over seven furlongs finishing on a mark of 70.

She then stepped up in trip from seven furlongs to a mile as a 3YO and found her winning way once more at Windsor in June 2021, winning off a mark of 76. She subsequently went on to compete promisingly at ratings close to 80.

Currently running at seven and eight furlongs, she requires a strongly run race in order to give her best performance, so Adam looks for races where she will be more likely to get a proper pace to race off. However, on her day, Daphne May is more than capable of beating very decent opposition. We constantly assess this filly and if Adam believes she has the right level of ability she may get entries for some of the more prestigious handicaps, or even have a tilt at a couple of Listed races in the racing calendar.

We expect to get 3-7 runs and sometimes more from all our 4YO horses per share period/season, however, you should expect periods of no racing as a result of recuperation from injury or training setbacks. This share period starts proper at the start of the turf season on April 1st 2022 and runs through the turf season until November 1st 2022, however, we will be reporting on the horse before the share period starts (from January 2022) should we have anything of importance to share with shareholders.

During the season the horse may be rested or have time away from the track to recover and it is quite normal for a flat horse to have periods of 3-6 weeks rest between races. Young horses are particularly susceptible to sore shins, bone chips and growing pains, and can need a greater time to recover between races.

We provide guarantees with all our racehorses. If this horse suffers a season-ending injury or retirement and has not already raced twice during the share period, we will replace her with an alternative horse for the remainder of the season. Replacement horses may not be of the same quality, are provided with no further guarantees and no alternative choice can be provided. Prizemoney cannot be paid on any replacements, but all other benefits such as yard visits and race day badges are available.

Owning racehorses is extremely risky - and you should be aware that there is a chance that your horse may not race at all. Around 15% of all horses in training will not reach the racecourse during any one season because of training setbacks.

As a shareholder you must understand that we cannot guarantee your horses performance, a specific volume of runs (beyond our minimum guarantee) or that runs will be evenly spaced throughout the share period. This is the chance you take when owning any racehorse and participating in this ownership experience. If you will be disappointed with only 2-3 runs from your racehorse during the season, then please DO NOT PARTICIPATE IN THIS OR ANY OTHER RACEHORSE, as you could be disappointed. We believe in being crystal clear with our shareholders - any participation in racehorse ownership is a risk, and we are unable to make any refunds because of share periods which finish early due to injury or retirement - as training, vets and livery fees for the horse still remain whether they are racing or not and part of your lease payment covers the five months of pre-season training.

UPDATE JUNE 2022
This filly has already run several times this season and so the above guarantee is no longer required for 2022.