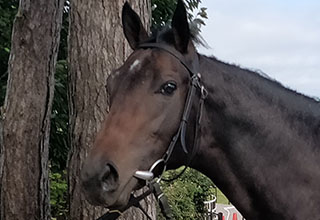 Only 1 share(s) equalling 0.25% is needed to qualify for prizemoney payments from Christmas Eve 2022's racing season.

Gender: Filly
Birth Year: 2020
Colour/Markings: This filly is a light, dappled bay colour, with the smallest of white flecks on her forehead. She has a grey/silver sheen to her coat.
Racing Post Form: View Race History
Racing Code: Flat
Expected to race in: North and Midlands

Holy Roman Emperor needs no introduction as he has been a top sire for many years. A son of the all-conquering Danehill, he was a top-class two-year-old and multiple Group 1 winner. He has an enviable record as a sire, and stands for GBP 12,500.

This mare has enjoyed plenty of success with her offspring, four of which have won, one of them in Group company and another being placed in Listed Class. One of her offspring, Amadeus Wolf Tone has won 23 times and over 240k in prize-money. He was also from the Danehill line, just like this filly.

If you are looking for a deeper involvement with Christmas Eve 2022, check out our list of Private Service shares. We may have leases or outright shares available in this racehorse from 4% and above.

We were very lucky to pick up a filly of this calibre at the sales. Her 'page' (pedigree) is truly impressive. Christmas Eve is so named, as on her first day in the Ollie Pears stable the trainer decided her stable name would be 'Eve'.

Christmas Eve is by Holy Roman Emperor, a talented six and seven furlong Group 1 winner trained by Aidan O'Brien in Ireland. He was very successful, winning the Grand Criterium and second in the Dewhurst. He has followed up his successful racing career with a hugely successful fifteen years as a sire of top-class progeny.

The filly's mother has really good credentials too - she has had four of her offspring win and two of them ran in Group races, one of them winning a Group 3 race. The mare was unraced but she has a full sister called Leadership who won several Group races including a Group 1. This sort of family so close to Christmas Eve is rare in a small-share syndicated racehorse.

Ollie told us "I looked at around a hundred of youngsters at Tattersalls and this filly was one which I had my eye on when she went through. She is built like a sprinter, so isn't huge, but I think she has the scope to fill out and perhaps get further as she gets older. But she walks like a quality horse with a proper pedigree - after all, she has half brothers and sisters who have won at the highest level!"

Ollie stated: "Both sides of Christmas Eve's pedigree are filled with black type - and not just on the second dams side - on the first! She went through the sale late in the evening and that's probably why I was able to get her within our budget."

Prospective shareholders should be aware that we are aiming to get this filly ready for the start of the season. She is a March foal, so will have time on her side. Her father ran as 2YO's, which bodes well for her possessing the sharpness which means she can be racing in April or May. She is also sprint bred, although by the end of the season she could be trying seven furlongs.

Named Christmas Eve, the filly is the latest in a line of 'Christmas' horses we have syndicated, and they have been very successful in the past. Christmas Night recently retired and was a multiple winner for his shareholders and we believe this filly has the potential to follow in his footsteps.

She is well put together, and has an amazing coat which is bay, but with flecks of grey and silver running through it. She will grow over the winter and based on her looks and pedigree, she should develop into a nice prospect for next season. Ollie was pleased with her when she arrived from Newmarket sales; she had travelled well and didn't seem too bothered by the long trip.

"This filly has very solid breeding and Selkirk mares do really well with Holy Roman Empire. Two-thirds of them have won races, and five of the fourteen have been rated 80+. A couple managed to achieve ratings of over 100. I'm not saying she will be a 100 horse, but she has a great chance of being capable of winning races coming from a family like this." stated Ollie.

Trainer Ollie Pears commented: "Since she has been here at the Malton yard we've got to know her. She is a friendly sort and has no vices. She's a kind horse and has obviously been well handled by the breeder."

Ollie went on to state "She is another of my youngsters who I'd love to take to York for the Rous stakes in June, or even better races than that at their May meeting if she shows the ability at home. Everything needs to work out for her, but at the moment she has a lot going for her."

Christmas Eve is currently at Ollie Pears' yard in Malton and will be broken in before November and then enter full training straight afterwards.  After trotting and cantering in December, she will have a short rest before getting ready to race in the opening stages of the 2022 season.

We are already reporting on the filly's progress for shareholders on an ad-hoc basis, reporting on the major breakthroughs with her training - and we will provide regular updates on her progress on the gallops and with her education in detail from January onward. During the heart of the season, we publish update reports every 7-10 days, and more regularly when she actively starts racing.

If everything goes to plan, and the filly is far enough forward both mentally and physically, she will start racing in April/May and then get plenty more gallop experience up the 'Wold Gallop' at Malton and will be race right through spring and summer 2022.  We expect between 3 and 7 runs from this filly this season, and she will most likely race around the Yorkshire, Lancashire and North Eastern racetracks.

Please note that a few of the photos of this filly show her wearing a bandage. This was just protection for a small knock she sustained when being transported from the sales. She is guaranteed totally sound.'

The race plans for this filly will be determined by her level of ability shown at home and on the course in 2022.  On breeding she should start at five furlongs and then will perhaps get further, most likely just six furlongs, as she develops physically and mentally during the year.

The standard route of a horse of this type will be to start in a Maiden (races for horses who have yet to win a race) or  Novice/Auction or Selling/Claiming races (2YO only races where previous winners get extra weight) and her performance in these first three of four races will determine whether she goes into nursery handicaps, or is good enough to tackle conditions races or even step into pattern races (high value, prestige races).

If, as we believe, she shows that she will be a 5f sprinter, then there are plenty of races available for her from late April onwards.  We will assess this filly's progress and if Ollie believes she has the right level of ability she may get entries for some of the more prestigious races in the racing calendar.

We expect to get 2-5 runs and sometimes more from all our 2YO horses per share period, however, you should expect periods of no racing as a result of recuperation from injury or training setbacks.  This share period starts proper at the start of the turf season on April 1st 2022 and runs through the turf season until November 1st 2022, however we will be reporting on the filly before the share period starts (from January 2022) should we have anything of importance to share with shareholders.

As a shareholder you must understand that we cannot guarantee your horses performance, a specific volume of runs (beyond our minimum guarantee) or that runs will be evenly spaced throughout the share period.  This is the chance you take when owning any racehorse and participating in this ownership experience.  If you will be disappointed with only 2-3 runs from your racehorse during the season, then please DO NOT PARTICIPATE IN THIS OR ANY OTHER RACEHORSE, as you could be disappointed.  We believe in being crystal clear with our shareholders - any participation in racehorse ownership is a risk, and we are unable to make any refunds because of share periods which finish early due to injury or retirement - as training and livery fees for the horse still remain whether they are racing or not and part of your lease payment covers the build-up to the season. This risk is the chance all shareholders take, as we do ourselves, when participating in the ownership of a racehorse.