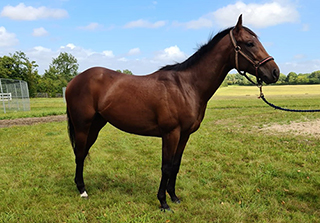 Only 1 share(s) equalling 0.4% is needed to qualify for prizemoney payments from Glen Rosa 2022's racing season.

Gender: Gelding
Birth Year: 2018
Colour/Markings: This gelding is dark bay in colour, and he has one white foot (back right). He also has a slight fleck of white in the centre of his head.
Racing Post Form: View Race History
Racing Code: Flat
Expected to race in: South and Midlands

This gelding is by Heeraat, who was a top class sprinter, winning at Group 3 level. He has been a decent sire of horses that tend to develop well with age.

Aunt Minnie never ran, however, she is the mother of Peggie Sue, also trained by Adam West. Peggie Sue is a half-sister to this gelding and is currently rated 85. Both Peggie Sue and Glen Rosa share the same lineage on the sires' side, being by the Green Desert line.

If you are looking for a deeper involvement with Glen Rosa 2022, check out our list of Private Service shares. We may have leases or outright shares available in this racehorse from 4% and above.

Glen Rosa is known as 'Champion' in the yard. He was a late foal, and as a result, he was given plenty of time to mature, only racing at the end of his 2YO season. He ran eight times as a three-year-old, but his year was affected by COVID and also a shut-down at the yard half-way through the season that caused the gelding to have a stop-start sort of season.

Adam told us "This lad is a real battler, and I was pleased with his 2YO runs. Unfortunately, he had a messy 3YO campaign, as we had to stop and start with him three times in total. However, he showed what he's made of late in the year with a really decent second placing at Wolverhampton - only the second time he'd run over the minimum distance."

Adam added 'I was always of the mind that he was a sprinter, but we never got the opportunity to get him two five furlong runs together. He also showed ability over six, seven and even a mile, which rather pushed us down the middle-distance route. However, once I'd got the chance to send him back over five in December, he showed he has plenty of tactical sprinting pace and recorded a really decent second placing.'

Trained in Epsom, the plan for this gelding is to have a full season of racing in 2022. The gelding will definitely run over sprint distances and may well run in January or February on the All-Weather. If so, we will bring the start of his share period forward so shareholders do not miss a run. He will also run on the grass right through the 2022 season. He is now nicely handicapped and we anticipate he will improve once he gets in the groove of five furlong sprinting.

"He has shown he will be similar to Peggie Sue, who fell to a low mark as a 3YO, but then improved significantly over the next few years. I expect, like his sister, he will improve all the way through his 4YO season, but he's already shown at home that he can hold his own," commented trainer Adam West.

He has grown and filled out this year, turning into a proper racehorse and delighted he proved himself capable with that decent run over five at Wolverhampton. It made the decision to keep him in training that much easier,' added Adam.

Adam's best guess at the moment is that Glen Rosa will be racing in handicaps through 2022. He is particularly hopeful he can find a few five furlong handicaps on good to soft ground, as the gelding will appreciate a little bit of cut.

Adam commented, "We're really looking forward to this lad's first few runs as a four-year-old, now we've found the key to him. All the indications at the moment are that he is taking the same path as his sister, and I anticipate we'll have him fully educated and raring to go by the time we get to spring 2022."

We will be staging shareholder visits to Adam's Epsom yard as soon as the weather improved in late March or April.

UPDATE JUNE 2022
Glen Rosa has now run three times this year, and gone close to winning. He returned after a break in June and ran a very encouraging race. We believe there will be plenty of races to be won with this gelding over the coming six months of the season.

The race plans for this gelding will be determined by his level of ability shown at home and on the course in 2022. At the moment he is likely to start in late January or February - having one or two runs on the All-Weather in order to get a win into him.

Glen Rosa is currently rated quite lowly, as a result of a messy 3YO campaign. However, we are expecting he will climb up the ratings now he has returned to sprinting. He was rated in the upper sixties as a 2YO and Adam is aiming to get him back there in 2022, but record a number of wins whilst getting him back up there!

We expect to get 3-8 runs and sometimes more from all our 4YO horses per share period, however, you should expect periods of no racing as a result of recuperation from injury or training setbacks.

During the season the horse may be rested or have time away from the track to recover and it is quite normal for a flat horse to have periods of 3-6 weeks rest between races. All horses are susceptible to sore shins, bone chips, breathing issues and growing pains, and can need time to recover between races.

As a shareholder you must understand that we cannot guarantee your horse's performance, a specific volume of runs (beyond our minimum guarantee) or that runs will be evenly spaced throughout the share period. This is the chance you take when owning any racehorse and participating in this ownership experience. If you will be disappointed with only 2-3 runs from your racehorse during the season then please DO NOT PARTICIPATE IN THIS OR ANY OTHER RACEHORSE, as you could be disappointed. We believe in being crystal clear with our shareholders - any participation in racehorse ownership is a risk, and we are unable to make any refunds because of share periods which finish early due to injury or retirement - as training and livery fees for the horse still remain whether they are racing or not. Please be aware that a portion of your lease payment covers the build-up to their season.

By buying a share you accept that the risks outlined above. They represent the chance we and all our shareholders take when participating in the ownership of a racehorse.